Gravity is a beautiful film. It has obviously been filmed and produced to showcase its dazzling visuals on the big screen and in 3D. However this does not mean that the translation to the small screen isn’t spectacular. However there are some times in the film where I found myself waiting for it to stop showing off how pretty it is and get on with the plot or some action. There are spoilers in this ramble.

As for the action, there are plenty of dramatic situations crammed into what is actually quite  a short film. Sandra Bullock is given plenty of chances to show that she is good at portraying a terrified novice astronaut. For a lot of the film there is a lot of hurtling about in space, both inside spaceships and outside them, crashing into things or having other things crash into you. This does get a bit tedious after a while and I began to long for a slightly more low key stranded in space movie like Moon. However, the debris impacts and explosions and the extreme EVA give the film much more scope to show off and much of it is startlingly pretty even in 2D on a small screen. Good use is made of extreme closups of faces in the first part to give an impression of the claustrophobia and isolation that must be felt in their situation.

The film obviously strives for some degree of realism, especially in the visuals. However much of the time the physical actions of the characters don’t seem to make any sense. I don’t want to make a list of goofs here, you can go to IMDB for that but there are a few that for me stuck out enough to mar slightly my enjoyment of the film.

Not the least of these being the initial premise of an orbiting debris cloud from one satellite managing to take out all other satellites and also miraculously be on the same orbit as the ISS, the shuttle and the Chinese space station. This exact situation could be accurately described as impossible without having anything more than a basic grasp of physics. Not to mention the fact that objects in orbit are deliberately placed so that their orbital paths keep them as far apart as possible, communications satellites tend to be about 20,000 miles further away from the Earth than the ISS. However, debris strikes in orbit are increasingly a danger to astronauts and there is no reason a less improbable but similar scenario could not have been employed. (Or a more improbable one would also have been better but it would have significantly changed the tone if Moon Nazis had suddenly started shooting down satellites!) 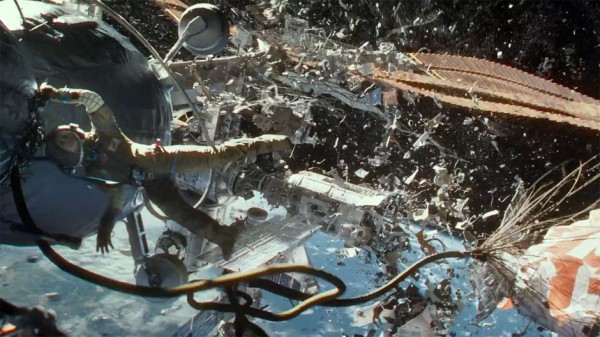 Early on in the film there are 2 occasions where the film overstates the danger to heighten the sense of peril. First when Ryan flies away from the shuttle, she is told she needs to get under control quickly or be lost forever. She takes much longer than allowed to do this but still gets rescued. Given the difficulty of locating her and the very limited manoeuvring capacity of EVA backpacks this was impossible enough to disable my suspension of disbelief very early on in the film.

Not long after that Kowalski and Ryan have reached the ISS (another impossible feat) and she is completely out of oxygen in her tanks and has been for a while. It is explained that she still has whatever oxygen is left in the suit, giving her a few more minutes after the gauges hit zero, but she is still far from safety when she starts getting poisoned by CO2 and passing out. Kowalski doesn’t seem to have any such problems despite being outside for at least as long as Ryan (although he is a pro and does seem to be wearing a different suit). I submit that being stuck in space on your own with minimal astronaut training and your spaceship/station facing imminent destruction by clouds of debris is perilous enough without trying to heighten it in such a gratingly improbable way.

I’m suspicious of the loss of communication with Houston (don’t they use radio rather than satellites to speak to the shuttle?) and Commander Kowalski “falling” off the space station as lazy ways of ramping up the tension too. But while they are noticeable during the film, they don’t detract much from the action and any suspicions you may have are soon eclipsed by another huge explosion or a beautiful vista of Earth. Or the International Space Station on fire!

By the time we get to the end of the film so many ridiculously unlikely things have happened that we barely bat an eyelid when Ryan manages to pilot a vehicle she’s never been in before where all the instructions are in a language she doesn’t understand, survives a very clumsy re-entry into the atmosphere, a violent landing at sea and a near drowning before struggling ashore and walking off.

In all, Gravity is a fun and exciting movie with beautiful photography with some serious flaws when it comes to realism. If prettiness and explosions can override your irrational desire for accurate science and a plot that makes sense then you’ll definitely enjoy it.

One thought on “Movie Ramblings: Gravity”